After years of raising animals for slaughter, this rancher decided to convert his farm into an animal sanctuary where creatures can peacefully live out their lives. Like many baby boomers, Mike Lanigan was taught the ins and outs of running a farm, specifically raising cattle for the meat industry. Alongside his family, he did this for decades on their farm in Uxbridge, Canada. One day, however, he decided that he had enough raising animals just so they could be slaughtered and become food.

After years at school and a period of time working with the forestry department, the farmer decided the animals he had grown up around and formed emotional attachments with deserved to live the rest of their lives in peace. That inspired him to convert the farm, which was once a place of death, to a sanctuary where animals of all kinds can live until they die of natural causes.

At The Farmhouse Garden Animal Home, 21 cows, along with horses, geese, and a “guard donkey” named Buckwheat, presently live on 100 glorious acres. The Dodo relays that this is the first year the farm hasn’t raised pigs or chickens to be slaughtered and sold.

Now that the beginnings of the sanctuary have been established, Lanigan is eager to start taking in rescued cows, “ones who have been taken by the SPCA or something,” he says. Attending school wasn’t the only catalyst that inspired the sanctuary. After watching an elderly farmhand who worked for his father tend to all the animals with love, Lanigan decided he could be just as compassionate.

In the video below, he says:

“I watched this hired man — he was over 90 — caring for our young calves with such love. And I thought, ‘How hypocritical of me to give something so much love and the end thing is so different from that love.” 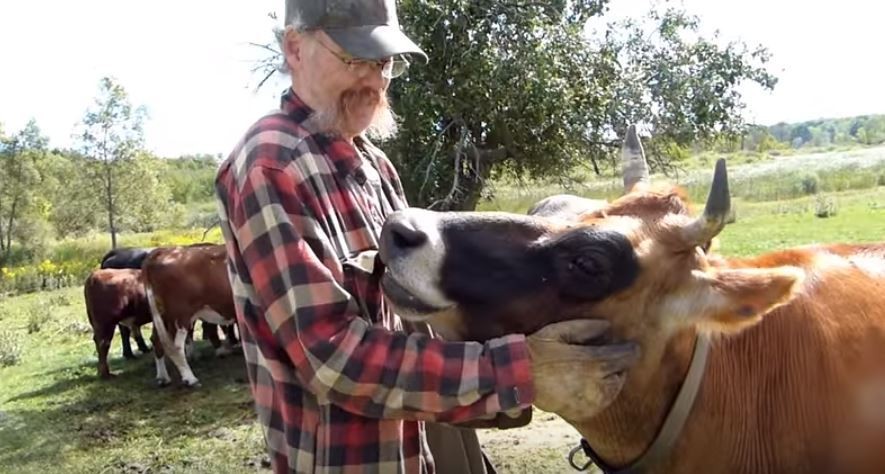 It’s relevant to note that the farm is not an official sanctuary yet. There’s a large overhead cost, as caring for the animals is an expensive task. Edith Barabash, who made the video (below) and who works with Lanigan at the sanctuary, says:

“We don’t have a specific deadline but honestly just as soon as possible. We do need a solid amount of startup money though, because raising cows is extremely expensive. But we’re getting there.”

Most of the farm’s money presently comes from the vegetables Lanigan grows and sells at a local market, as well as lumber cut down on the property. In addition, the Canadian farmer is able to sell a little maple syrup for some extra income.

Lanigan is still forging his newfound relationship with the animals at the farm, but he’s optimistic to  transform the property he’s secured into a sanctuary for rescued creatures.

Please watch the video below:

Follow Lanigan’s journey as he transforms his farm into an animal sanctuary here. You can also support the farm through its Etsy page.