“I farm vegetables now instead of pigs.”

Bob Comis was a very happy pig farmer, for about eight years. At his peak, he raised 700 pigs in a year — sending each and every one of them off to slaughter.

“I loved the work. I loved being around pigs, who are absolutely incredible beings, and I loved the positive effect that the physical labor and steady routine had on my mental well-being,” Comis says.

Comis also loved that he was able to give his pigs a good life, during the time they were alive. Unlike the pigs raised at factory farms, his pigs got to spend time outside; they had complex social arrangements.

He saw himself as part of a movement to bring humanity, and concern for animal welfare, to the food system.

Then nearly two years ago, Comis found a moment of communion with the pigs that changed everything. 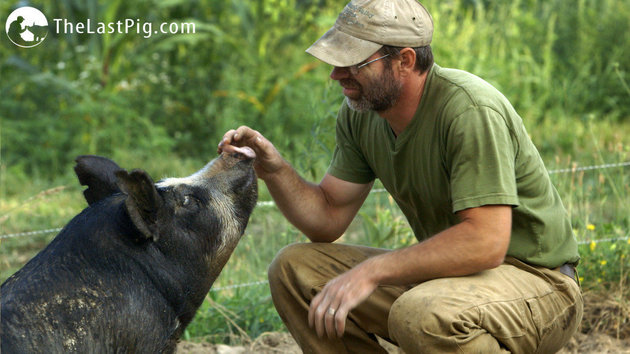 One cold morning in January 2014, Comis was making his rounds on the farm in upstate New York.

“Everything seemed pretty normal, until I approached one group of pigs,” says Comis.

For no reason that he can precisely pin down, Comis just suddenly was overcome with the feeling that “things had suddenly become very different.”

“As I looked at the pigs, they seemed different to me somehow,” he says.

In that moment Comis resolved to change his ways and decided to become a vegan.

But first, he sent those final pigs to slaughter. Comis is now the subject of an upcoming documentary called “The Last Pig,” directed by Emmy-winner Allison Argo. The film follows Comis through his last year of farming pigs and his transition into a new business and a new life.

Argo tells HuffPost that she’d been interested in making a film about the ethics of eating animals for a while, but hadn’t yet come upon the right subject. Then she discovered Comis, who’d started writing about his reckonings on places like The Huffington Post and Salon, even before the experience that made him quit pig farming for good.

“I knew this was the story I’d been looking for,” Argo says.

The two are about a year and a half into making the independent documentary, which they expect to release before next summer. You can see the trailer, up at the top of this page (watch out; you might cry as you realize that the friendly pigs you’re seeing Comis with aren’t, well, pets).

There’s an Indiegogo campaign going now, to raise the money to finish the film.

Argo’s goal, when the film is released, is for viewers to have their own rethinking about who and what pigs really are — and how we as humans relate to all animals.

As for Comis, he’s still vegan; his transformation stuck.

“I farm vegetables now instead of pigs,” he says. The Last Pig’s Indiegogo campaign, which is nearly fully funded, runs until Nov. 10. You can follow the film on Facebook.