Soon, they will be completely exterminated. 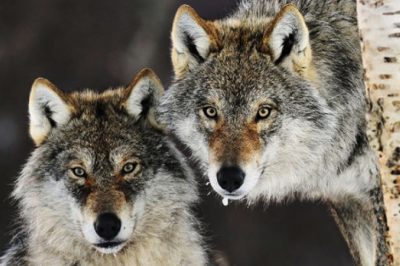 As news of propositions to kill wolves and wild horses in the U.S. circulates, there are other countries where similar plans have already been approved. In Norway, where only 68 wild wolves remain, the government announced their decision to kill 47 of those wolves.

It comes as no surprise that the reason for killing the wolves is to protect commercial livestock raised for meat, although it’s no less alarming. In the U.S., a war against wildlife in favour of livestock is also prominent, and it’s no different in Norway.

Silje Lundberg, chair of Friends of the Earth Norway, told the U.K.’s Express,

“The wolf population is already very small and critically endangered. To eradicate 70 percent of such a vulnerable species is shocking.” Frequent culling has earned Norwegian wolves the title of “critically endangered,” a fact which the government has completely disregarded in order to support big farms. Culling results when wolves either attack livestock and threaten the health of the farm or when farmers need to expand their land because of overgrazing, effectively taking over the wolves’ areas.

Wolves in Norway kill significantly less livestock, namely sheep, than other factors in the environment, such as poisonous plants, drowning, traffic accidents and various diseases. According to recent reports, wolves killed 1,500 of the 2 million grazing sheep in the country annually, while over 100,000 are killed in various other ways.

What’s worse is that culling wolves isn’t proven to be an effective means of protecting livestock; however, with a heavy and unjustified cull like this, it’s certain that it will reduce the amount of livestock deaths. The ecosystems are bound to suffer profoundly, as wolves are a keystone species. National Geographic states,

“Without keystone species, the ecosystem would be dramatically different or cease to exist altogether.” Wolves are crucial components of their ecosystems and are the driving force behind keeping them balanced. Their reintroduction into failing ecosystems has proved to be extremely successful, so their removal from healthy ecosystems will likely be devastating.

Nina Jensen from the Norwegian branch of the World Wide Fund for Nature told The Guardian,

“This is pure mass slaughter. We haven’t seen anything like this in almost 100 years, when the policy at the time was to exterminate all the big predators.”

You can sign the petition to help stop the slaughter here. Lundberg explained that protesting and demanding that the plan be stopped is at the center of their agenda with this issue:

“With this decision, three out of six family groups of wolves might be shot. We are calling on the minister of environment to stop the butchering. Today, Norway should be ashamed.”